Whew! Today was another full day of fun in India. Monday was our only day in Jaipur and we wanted to explore as much of the colourful city as possible. We started off with a tour of Amber Fort, an ancient maharaja palace built on a mountain. There was an option to reach it by riding on elephant back…and we took it!

Can you spot the elephants?

I wasn’t aware we’d be riding elephants until the day before it happened, which was good because it allowed me less time to feel nervous about it. Meaning I was pulling my hair out as we drove up to the elephant station and saw the animals we’d be getting on:

We were way up there. What a ride!

I’ve taken an elephant ride once before, around age 5, but was probably too excited to be scared. This time, I couldn’t help but wonder: what if the elephant collapses while heading up this steep cliff in 30 degrees?! Thankfully, other tourists around us looked just as nervous as I did. We met our Jaipur guide, Vijay, who explained that he would meet us at the top and take us on a tour of the Fort. My mum and I climbed onto a padded cart atop one of the elephants and, before we knew what was happening, we were off. You may not know this (I didn’t), but large animals tip and veer as they walk, making for a very bumpy ride. Let’s just say I was glad I’d taken Gravol before the ride! It would start to feel fun for a few minutes and then the animal would tip to one side, forcing us to lurch forward with each step. (I had a death grip on the side handle of the cart at all times to help steady myself.) Meanwhile, my mum was loving it! Behind us, my dad was having a ball – he had bought a colourful Rajasthani maharaja hat and looked like a king as he rode his elephant.

The elephant driver seemed to enjoy getting the animal to speed up to a gallop because of the terrified squeals I was emitting, but overall it was a fun experience and definitely out of my comfort zone. And it beat the heck out of climbing up the mountain!

Amber Fort, built in 1592, was stunning. As Vijay explained, the maharajas led very good lives and enjoyed opulence. Their grand halls, palaces, gardens and private chambers were fascinating to look at and nicely tied together the examples of Mughal architecture, ancient marble and sandstone carvings, and Islamic gardens that we’d seen recently. 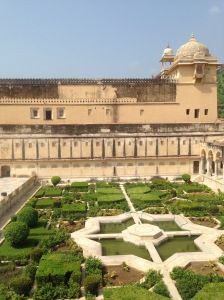 Wouldn’t it be fantastic to live in a place like this?

After the Fort, we stopped for a photo op of the Jal Mahal, a palace built in the middle of a beautiful, man-made lake.

Vijay then took us to an emporium that had silk and cotton scarves, tablecloths and pashminas along with material for men and women’s clothing. My parents each got an Indian outfit made (it would be dropped off at our hotel later), then we went to a jewellery store and my dad bought me a beautiful sapphire ring. It’s my birthstone and he knows I’ve wanted one for a long time!

Tomorrow (Tuesday) we leave for Dubai. India has been absolutely phenomenal and I’m sad to leave it behind. Stay tuned for Day 1 in Dubai!