Happy New Year, everyone! Can you believe another year has come and gone? As a friend said recently, “I’m not sure how we survived 2018, but I’m just thankful we did.”

As we come up with goals and resolutions for this year, let’s remember that the new year signifies a fresh start. If there’s something you’d like to change about yourself, such as a certain habit, mindset, or perspective, there’s no better time than today – the first day of 2019 – to make that change. As 2018 reminded us, life can be short, stressful, and often unfair. There’s no point in waiting for the right moment to better yourself, because that moment may never come!

To use a cheesy (but still relevant) quote from Gandhi, “You must be the change you wish to see in the world.” So what are you waiting for? 🙂 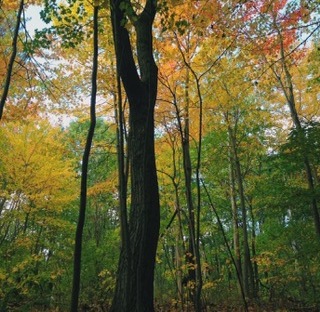 Last Sunday, my parents and I went on a pre-Thanksgiving hike to get some exercise and enjoy the beautiful colours of autumn here in Ontario. We decided to check out Northumberland County Forest, situated near the town of Cobourg, which is about an hour’s drive from Toronto. Northumberland Forest offers over 45km of hiking trails as well as routes for snowshoeing, horseback riding, hunting and ATVing. Having never been there before, we weren’t sure where to find the hiking trails; vague road signs led us to Morris Trailhead, a series of trails located in Northumberland County (which is about 15km north of Cobourg). The first thing we saw was a massive warning sign for black bear sightings in the area! This freaked me out more than I’d like to admit, though you can’t really blame me given this terrifying Leonardo DiCaprio VS Bear fight scene from The Revenant that was recently burned into my brain.

Surprisingly, we hiked about two hours (7km) without running into a single creature, bear or otherwise. Two ATVs whizzed passed us and we heard the occasional hunting rifle go off, but apart from that we saw no one else on the trail. I strongly believe in safety in numbers, so little wonder I was so jumpy with the three of us walking through a secluded forest in the middle of nowhere! My heart skipped a beat every time a twig snapped, but eventually I realized that the recurring sounds of dirt bikes and hunting rifles would likely keep bears away from the trail during the day.

I really enjoyed the relative quietness of that trail. We’ve hiked many a time up north in Algonquin Park, and although the scenery and colours were always unreal, the trails could get a little crowded. There was something special about the feeling of being removed from the hustle and bustle of Toronto while we walked through Northumberland Forest. The colours weren’t too shabby, either: 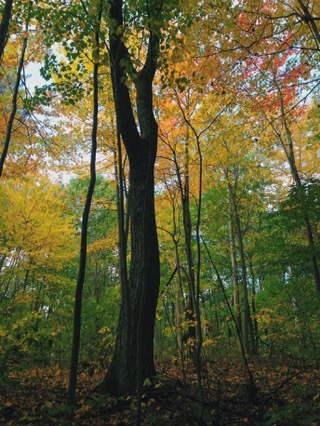